This day started with hearing sad unusual news and actions. When I woke up, my father told me, as one of our relative died from throat cancer on the way to Colombo General Hospital, at Puttalm. The second bad news was, one of my friedn called and informed that one  of my friend met an accident day before yesterday and got admitted to hospital, Unfortunately I heard this news also after two days on this day.

I got ready to work, though I woke up late, I rushed myself  and got ready to go work. I left to the bus halt at about 7.30 am to go office.

When I reached the bus halt, the bus I should take was just passed in-front of me. I scolded my self and waited until the next bus come.

While I waited there, I saw a school boy was looking at both sides to cross the road. After saw this I looked at the right side from where bus come. I did not thought of helping the small boy to cross over the road.

At the same time a push-cart man passed by the place where I stood. Who collect used papers and used bottles to sell and he carry on with his life. When the push cart man gone near to the school boy he asked the small boy “Whether he wants to cross the road?”. As the small boy said “Yes” he stopped his pushcart and placed a stone on the wheeels of push cart(to make it not to move). He hold the school boy’s hand and took him to the other side of the road and he came back to this side, where his pushcart was there, and he was walking on his way. 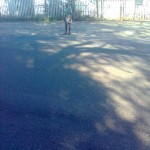 When I saw that an uneducated push cart man helping the child to cross the road and me, a cost accountant did not think of helping the child. I was thinking to myself until I reach office, what is the difference between me and that man who helped the child.finally endup with the answer that he was a person with much more ‘humanity’ comparing to me and i felt ashamed of being like hat.

One thought on “Humanity Of A Push Cart Man”